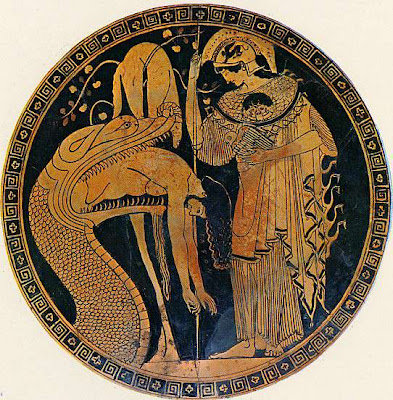 In a dream I was sitting near Athena in a Greek cave.

She revealed to me that it's her lightning-quick "wisdom" that manifests all appearances in this world of life and death.

Zeus was nowhere to be seen. I had the feeling she'd made him up too.

Athena then touched my forehead to show the exact spot where she lives in order to assemble the strange appearances of a "physical world."

She showed me that "my" whole concept of "I" is just another instance of her playing at being not her. Smiling, she was very proud of this.

I asked Athena why she had created the appearance of so much ugliness, pain and horror.

She explained that the goal was a sharper perception of the supreme aspect of all so-called phenomena: mind-boggling beauty.

I asked what meditative or renunciative practices might help people to fully realize the astonishing truth she’d just laid out.

She said none, there’s nothing you can do, you’re an illusion -- only I can realize truth, and I already do realize it.