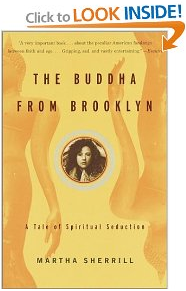 Buy The Buddha from Brooklyn

Just a few days ago "Jetsunma Ahkon Lhamo's" sadistic Kunzang Palyul Choling cult put me on notice that they know the name of my girlfriend. (I knew this was coming down the line about a week ago when I saw that somebody had landed on my blog page by Googling "andrew wilson's girlfriend," so I wasn't really that shocked.)

Well, now the local police know that Ally Zeoli, who lied to the FBI to get them to invade my home with guns drawn, is publishing my personal information in an anonymous threat and slander blog, trying to meddle in my romantic life, and possibly hinting at a threat to my girlfriend -- after all, Ally has a history of violence against women (she was once booked for assault and battery on a nun, and no, I do not make this shit up but just report it straight) -- so I guess we're "Even Steven." Maybe it would be a good time for everybody to shake hands and go home.

Yet today the mentally disturbed Tulku and the cowardly and extremely nasty "Buddhist monk" Davy Williams jointly publish another anonymous blog post full of gloating self-congratulation and ultra-violent imagery, suggesting that I ought to "feel the sharp edge of a knife blade"!:

Once more, Ally Zeoli and Davy Williams are cherry-picking and posting my "tweets" out of context surrounded by hate-commentary and sarcastic, violent language -- just as they did all through 2010. To misquote Yogi Berra, "it's déjà-Tulku all over again."

(Note that Zeoli and Williams are both "blocked" by me, along with their whole crazy Sangha, and shouldn't be concerning themselves with anything I tweet. I post on Twitter for my friends. What I say there or don't say is no monkey-tulku business of theirs. Like many people, I use Twitter to rant, to experiment, to play and sometimes to "vent." I don't speak in a secret code, and it goes without saying that nothing I ever write on Twitter or anywhere else should be taken as an attempt to offend or distress anybody.)

Why are Ally Zeoli and Davy Williams doing all this again now? Maybe they're bored. Maybe it's too hard to concentrate on Ngöndro, arousing Bodhicitta feels just ho-hum, and meditating makes their legs stiff. Or maybe just because they enjoy trying to intimidate, scare and hurt people.

If so they can stop right now, because with me it won't work. 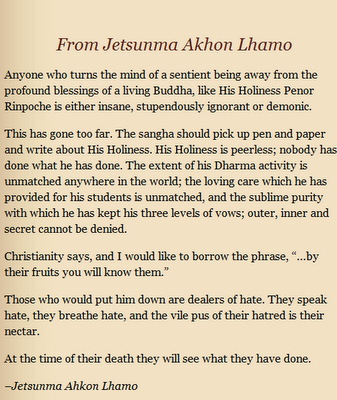 This is Ally Zeoli, in her capacity as an enthroned Tulku in the thousand year old Nyingmapa tradition of Tibetan Buddhism, boldly pronouncing doom and horror on people who've upset her highness and informing them exactly what they're going to realize at the moment of their deaths. How spiritual! How compassionate! Right? Though I would say, rather: how vile and how threatening. (This screen capture is from 2008, by the way -- that's how long she and her cultists have been stalking William Cassidy and Nydia Alexander.)

Why is this any of my business? It isn't. I wish Ally and Davy had left me out of it.

Note that in their most recent blog post about me, Zeoli and Williams continue to speculate in rankly offensive terms about my relationship with my girlfriend, careful to mention her by name so that I know they've "investigated" me thoroughly via a Google search:

Nothing gets posted on "Protecting Nyingma" without "Jetsunma's" direct approval. The blog can easily be traced via subpoena. This is typically creepy, evil stuff from a pair of very disturbed and unhappy people. I am going to keep handing on this type of horseshit to my lawyers and the police, as well as publicly appealing to anybody I think might be able to mute their obsessive and hateful behavior -- Karma Kuchen Rinpoche, Gyatrul Rinpoche, Steven Seagal, the Dalai Lama, whoever.

I'm not afraid of Ally and Davy. Nor do I hate them. On the contrary, I pity them deeply for never being able to taste true kindness, or experience the joy of simply Being in the here-now. Anybody who hears my story realizes the truth of it at once and becomes sympathetic -- even the FBI agents in my house, once the situation calmed down, seemed to realize that something was very "off" about this particular raid and turned almost apologetic. Karma means that the nastiness people do to "others" always comes back around to them.

Meantime, while patiently waiting for the Black Dog of Bad Karma to bite them in their overstuffed asses, if Ally Zeoli and Davy Williams really want me to stop talking about their ongoing fright-intimidation efforts on my blog and Twitter page, I can suggest one simple, direct and sure way to achieve that aim: stop cyberstalking me!