Andrew Wilson (老虎) experienced this insanity firsthand, starting in 2009, when the cult targeted his (then anonymous) Twitter account as a "sock puppet" for the cult's nemesis and sworn enemy, Tenpa Rinpoche -- a man who, the cult claims, has more identities and wicked plots than Fu Manchu in his heyday. Here is a recent photo of Tenpa Rinpoche, proving his wicked evil: 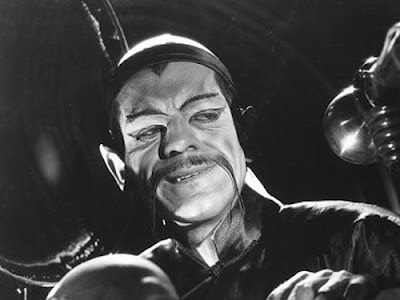 Would you buy any Dharma from this man? We think not. The investigators at DSZ are still investigating the full extent of this insidious Yellow Peril. Meantime, here is a recent post from the Kunzang Palyul Choling's "anonymous" defamation-and-hate blog, suggesting that Andrew Wilson, in some wicked alliance with @mana_horse on Twitter (supposedly another "sock puppet" of Fu Manch- I mean, Tenpa Rinpoche's) has something to do with the Low Flying Helicopter Peril that is even now terrorizing the cult's Maryland spiritual haven (some would call it an unlucky doomsday compound): 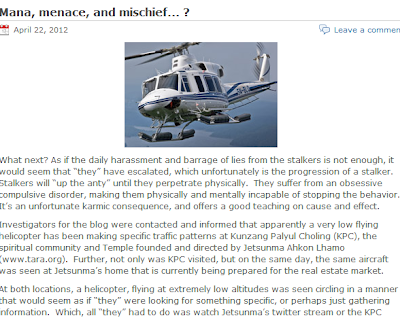 Shudder! I can almost hear the chilling whup-whup-whup of the rotors. And now a spooky, crooning voice begins singing some psychedelic shit about meeting in the back of a blue bus, riding a snake to an ancient lake, and so on. ("Sedona. Shit. I'm still only in Sedona." [Note: it's actually Poolesville, Maryland that the helicopters are supposedly buzzing -- not the other doomsday compound where "Palzang" enjoyed so many auspicious mornings tutoring underaged pupils in the subtle mysteries of Guru Yoga. "Sedona" just sounds more like "Saigon."])

This steaming pile of horse manure would be funny if it were not so pitiably sad. In yet another crazy post (which, our blog investigators say, was definitely authored by Davy Williams -- though a pedophile named "Palzang" aka John Buhmeyer kindly helped out with the copy-editing from the Arizona prison cell where he is serving a 20 year mandatory, ah, guru yoga retreat), the "Protecting Nyingma" fanatics repeat their tiresome lie that Andrew Wilson is a "partner" of William Cassidy's in "stalking, harassment, and threats" against the Living Buddha: 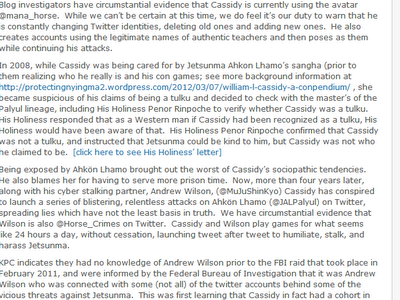 Let's be vividly clear. I feel free to speak of what concerns me on my Twitter page. The Kunzang Palyul Choling assholes inserted themselves into my digital, then real life in the most vicious ways. I didn't approach them; rather, they pursued me with crazed cult obsessiveness. Their conspiracy culminated in me getting handcuffed at gunpoint in my own home and questioned by clueless federal ninjas about my relationship with William Cassidy. I can't help it that the FBI couldn't find a single thing to charge me with, either in what I've written online or on my cell-phone and laptop computers. I suppose that means I didn't do any of what "Protecting Nyingma" says I did. Or maybe Davy Williams is smarter than the FBI and possesses some top-secret "circumstantial evidence" unavailable to the federal government and its army of investigative agents, lawyers and lab technicians.

If I had ever really "threatened," "harassed," or "cyberstalked" Alyce Zeoli and her cult, the FBI would have charged me for it. That's what the FBI does -- investigate crimes, then charge people for them. (That, and sometimes lure or entrap people into committing crimes.)

My Twitter posts are open to the public -- anybody who's interested in Zen is welcome to follow me at @MuJuShinKyo. You can see for yourself if my ongoing high-spirited mockery of the Buddhist religious establishments, Zen as well as Tibetan, amounts to singling out any one person. If I treat the Kunzang Palyul Choling cultists with special disdain, that's merely due to the evil tactics they used to try to impose themselves on my life, the cowardly way they lie about and defame me online. and the fanatical intensity with which they even now attempt to interfere with and deny me my basic human right of free speech. It's all the more absurd in that they don't even know me. But perhaps they perceive the simple, clear "Mind-Seal" I carry as a threat to their frightened and "stupa-fyingly" over-elaborate religious faith.

It doesn't matter. Cowards who use anonymously written blogs to attack their enemies are beneath contempt. The best I can manage right now is a sort of sardonic and no doubt weary-sounding disgust for these obsessive cyberstalking cultists who my dear friend Miranda Plusser so aptly termed "evil lizards."

The truth is that for a whole year an obese manic-depressive schizoid scam artist named "Jetsunma Ahkon Lhamo," a cowardly fascist monk named David Williams, and their pedophile monk compatriot John Buhmeyer loudly and publicly insisted that I was Tenpa Rinpoche. I wasn't. Oops! Proven wrong they deleted their hundred pages or so of "hard evidence" that I was him from "Protecting Nyingma," sans apology, no doubt to avoid an even more drastic public shaming than that which they've justly received. These same saffron-garbed emotional, intellectual and moral idiots now insist that @mana_horse is Tenpa Rinpoche. He isn't. I have no idea who is flying helicopters around the cult's compound. Maybe it's the FBI, wanting their reputation back.

I've never had shit to do with William Cassidy, although he blocked me for a while on Twitter. But I know this. William Cassidy would have to be the biggest suicidal fool in the world to open fake Twitter stalker accounts to harass "Jetsunma" after he spent 10 months in a federal prison for the unfortunate tweets his consort ex-KPC nun Nydia Alexander made from their joint computer. Let's get real. The FBI knows the man's IP address in the California high desert. If he tries anything, anything at all, he's back in the clink.

As I mentioned before, it's my belief that everything on the crude and poorly written "Protecting Nyingma" blog is personally approved by the psycho lady herself before it goes to Wordpress. Ally Zeoli is a fan of micro-management when it comes to the Internet. According to the federal complaint against William Cassidy, Ally has a committee of no less than nine cult members who scour the Web day and night for mentions of her name. They report to her once in the morning and once in the evening as to her Klout ratings and other vital matters of Tulku importance. (Why this detail wasn't a red flag signalling paranoid delusion to the FBI agent "investigating" the cult's claims about Tenpa Rinpoche is beyond me.) Yet when her ordained KPC monks are scouting the playgrounds for worthy children to turn into tulkus, Alyce is always "gone fishin'" or "out to lunch." Or running from "safe-house" to "safe-house" in feigned terror. Hmm.

Why are the KPC cultists getting so crazy on me right now? Is it the surrealist fun I was having with the #Tulku hashtag? Steven Seagal Rinpoche, the other American recognized as a Tulku by the same high lama who recognized Alyce Zeoli as one, doesn't appear to be agitated by it.

Though I rarely mention Ally Zeoli on Twitter, just last week I happened to be flipping through a book called THE BUDDHA FROM BROOKLYN to try to get my money's worth out of it before I toss it into a fire and kept landing on passages far too sardonically amusing to hold back from my rabid Twitter fan base. So I posted these comical quotes dealing with the illustrious early career of Catharine Burroughs: 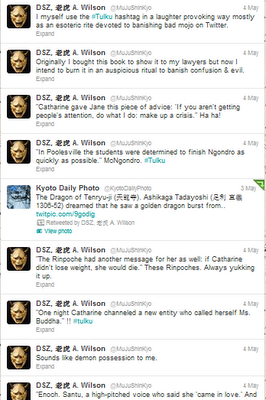 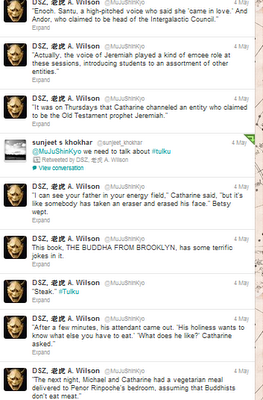 "Tweeting" these blackly amusing quotes from a published book I paid good cash for is, it seems, what the mind-numbingly stupid Davy Williams considers "humiliating," "stalking" and "harassing" the Embodiment of Primordial Wisdom. It isn't. Not even in anybody's wildest and most psychedelic Low Flying Helicopter dreams. Learn to laugh at yourselves, cultists; you'll be one hundred and thirty-three percent happier.

I've now retired the #Tulku hashtag from my Twitter account, after squeezing as much zest and juice out of it as I could manage. But I can't resist modifying the following Jim Morrison lyric, which I hereby dedicate to low flying helicopters everywhere:

See "The Deadly Viper Assassination Buddhists" for more Faux-sattva madness. For the specifics of the FBI raid, see "A Short Interview with Andrew Wilson"