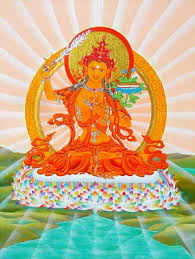 People are always falling into deep shit because they regard "thoughts" as merely the bits of mental content they are aware of at any moment. So when they hear a Buddha's teaching, they think, "all I have to do is empty my mind? Great!" They sit in zazen, and as soon as they feel the mind is empty, they feel they've realized Truth right there on the zafu. Bingo. Enlightenment!

Sorry! If such were the case, then Zombies realize Truth.

Even many so-called spiritual "seekers" never become aware of the buried, unconscious persistence of a sub-cognitive conceptual framework that quietly and deftly "sets the stage" for all mental verbalization and imagery. It was well known, however, to Mahayana Buddhists as the karmically "defiled" aspect of alaya vijnana. The Lankavatara Sutra explores and shatters the very deepest of those preconceptions that cause the separateness-delusion to persist. So do the eight books and many magazine articles by Master Wei Wu Wei.

"Time," "space," and the notion of separate "things" and other "subjects" are all part of this framework, the conceptual architecture of the "stage" on which a phenomenal world gets played out in all its stalking sound and fury as if it were solid and not made of Emptiness itself, Mind appearing to Mind. You might as well call it "the Matrix," since it is made up of concepts that are as dry and abstract as a string of computer code. It's the operating code that runs all the various karmic role-player games and action simulations throughout the Three Realms and Six Pathways. Crack this code and you're free. It's simple, but you have to be a warrior who knows how to laugh.

"Objects and subjects existing separately in 3 dimensions of space and 1 of time" -- this absurd knot of presumptions has got to be slashed by the blazing sword of Prajna, upon which the abstract concepts become meaningless, are revealed as empty, and dissolve into Nothing.

Intellectual sharpness is not counter to Wisdom. Manjusri's wisdom is a lightning bolt. Thoughts inspired by the wisdom attained in deep meditation or kensho experiences are quick and clear enough to destroy the senselessly abstract concept framework of "separate things existing in objective time and space" and reveal the truth that Mind-ing is all there ever was or is or will be. Having realized this intuitively, one has attained the luminous Buddha Mind Jewel, the Dharma Body of flawless purity. BO-JI SO-WA-KA!