Cut off the Way of Thinking 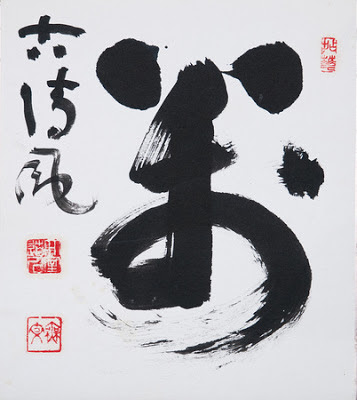 [Note: I am often amazed by the intense criticism of this blog by "Zen practitioners" who find  me extreme for insisting that a "thinking-process" obstructs Satori. Many of these self appointed Zen experts seem to believe that their own "thinking" is entirely natural and satisfactory and that absorbing words and letters -- especially the sayings of the Patriarchs and Masters -- and debating what they mean is the fundamental Way. Some even claim that Satori is unnecessary! "After all, I do perfectly well in life, and I never got Satori -- so why should anybody else?" Or, "If you try to 'cut off thinking' you are just falling into another illusion! Forget about Enlightenment! Everything's exactly the same -- 'nothing from the beginning' -- so it's a mistake to make any effort whatsoever." These faux-Zen loudmouths seem not to realize that the great Masters were not always great Masters, but became so by training hard and attaining Satori rather than by reading and debating books.

I should clarify just what is meant by "training hard" in Zen. If your thoughts are constantly running away with you, and if you have come to feel that "my thinking is my true self," it may be extremely "hard" to "cut off the way of thinking" as Mumon Ekai advises. It is in fact quite hellishly difficult for some people to sit down, face a wall and experience the substance of their own minds "before thoughts arise." They would prefer to endlessly debate intellectual ideas. Mumon Ekai himself was an intellectual, so it must have been even harder for him to attain Enlightenment than for most. But some people hear and "get it" instantly. Mumon finally got satori at the close of an all night Zen session, when he heard the temple bell boom out at dawn. He had forgotten both himself and the universe. At that instant there was no one anywhere ever to hear, yet the temple bell's sound was clearly and instantaneously heard nonetheless. Amazing! Mumon Ekai wrote the Mumonkan out of grandmotherly kindness, because he now wants you to experience This! Wake up!

For Zen to be Zen it must be "from ancient times, a pure fresh breeze," as in the calligraphy above by Yamada Mumon. In that spirit, here is the opening "case" of the Mumonkan, which sets out the basics of how to actually practice Zen to wake up and become a free human being. I don't say anything Mumon Ekai didn't -- I just say it with a different energy and in a different way. Let's hear what Mumon says about doing Zen in reference to penetrating into Joshu's "Mu": You must completely cut off the way of thinking; you must raise a great sense of doubt and carry it with you day and night without forming any commonsense interpretations based on "has" or "has not"; you must arouse every pore in your body and use all your energy to try and resolve the dire life and death problem that the koan incarnates. If you succeed, it will be like a sudden explosion that destroys all your illusions and you will "know" Zen in the most direct way. Enjoy! I hope Mumon's instructions help you to wake up, "astonish the heavens and shake the earth," and to live out the rest of your life in "merry and playful samadhi"!]

Mumon's Comment
無門曰、參禪須透祖師關、妙悟要窮心路絶。
In order to master Zen, you must pass the barrier of the patriarchs. To attain this subtle realization, you must completely cut off the way of thinking.
祖關不透心路不絶、盡是依草附木精靈。
If you do not pass the barrier, and do not cut off the way of thinking, then you will be like a ghost clinging to the bushes and weeds.
且道、如何是祖師關。
Now, I want to ask you, what is the barrier of the patriarchs?
只者一箇無字、乃宗門一關也。
Why, it is this single word "Mu." That is the front gate to Zen.
遂目之曰禪宗無門關。
Therefore it is called the "Mumonkan of Zen."
透得過者、非但親見趙州、便可與歴代祖師把手共行、眉毛厮結同一眼見、同一耳聞。
If you pass through it, you will not only see Jõshû face to face, but you will also go hand in hand with the successive patriarchs, entangling your eyebrows with theirs, seeing with the same eyes, hearing with the same ears.
豈不慶快。
Isn't that a delightful prospect?
莫有要透關底麼。
Wouldn't you like to pass this barrier?

將三百六十骨節、八萬四千毫竅、通身起箇疑團參箇無字。
Arouse your entire body with its three hundred and sixty bones and joints and its eighty-four thousand pores of the skin; summon up a spirit of great doubt and concentrate on this word "Mu."
晝夜提撕、莫作虚無會、莫作有無會。
Carry it continuously day and night. Do not form a nihilistic conception of vacancy, or a relative conception of "has" or "has not."
如呑了箇熱鐵丸相似、吐又吐不出。
It will be just as if you swallow a red-hot iron ball, which you cannot spit out even if you try.
蕩盡從 前惡知惡覚、久久純熟自然内外打成—片、如唖子得夢、只許自知。
All the illusory ideas and delusive thoughts accumulated up to the present will be exterminated, and when the time comes, internal and external will be spontaneously united. You will know this, but for yourself only, like a dumb man who has had a dream.
驀然打發、驚天 動地。
Then all of a sudden an explosive conversion will occur, and you will astonish the heavens and shake the earth.

如奪得關將軍大刀入手、逢佛殺佛、逢祖殺祖、於生死岸頭得大自在、向六道四生中遊戲三昧。
It will be as if you snatch away the great sword of the valiant general Kan'u and hold it in your hand. When you meet the Buddha, you kill him; when you meet the patriarchs, you kill them. On the brink of life and death, you command perfect freedom; among the sixfold worlds and four modes of existence, you enjoy a merry and playful samadhi.

且作麼生提撕。
Now, I want to ask you again, "How will you carry it out?"
盡平生氣力擧箇無字。
Employ every ounce of your energy to work on this "Mu."
若不間斷、好似法燭一點便著。
If you hold on without interruption, behold: a single spark, and the holy candle is lit!