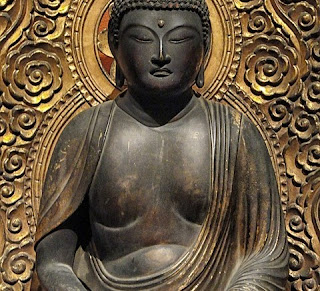 At first there was a Dharma to transmit,
Transmitted it became No-Dharma.
Each man should realize the nature of his self,
And then there is not (even) a No-Dharma.

Q.: Where does ignorance come from? What causes the illusory universe? How does Zen conquer ignorance & make all delusions vanish?

A.: The Shurangama Sutra uses the analogy of an optical illusion (say, a halo around a lamp) that "arises" caused by a sudden inflammation of the eyes. In reality, it hasn't "arisen" anywhere. Since the halo is caused by an inflammation, this false perception doesn't belong to the lamp or to the eyes or to the intrinsic nature of seeing, and once the inflammation ceases there's no more trouble.

Yet the habit of conceptual thinking may lead a person who is ignorant of the fact that the halo is only the result of an inflammation to believe that the halo actually exists, or that everyone else must see it, or that it is the natural and inevitable result of using one's eyes or intrinsic to the nature of seeing, and this idea is what causes "confusion" about what is really going on. In reality, it's just like a dream or a brief episode of madness. One's momentary confusion is extended and deepened by reliance on false thinking. So in Zen we get rid of our false thinking. As a matter of fact, we get rid of thinking entirely, at least until kensho occurs.

According to this sutra I've mentioned, the Mind-Essence has the nature of openness and brilliance, and so can create endless transient appearances, but it is when "thinking consciousness" comes into the picture that the real confusion happens and suffering begins.

Some esoteric Tibetan texts use the same analogy, but rather than eye-inflammation they talk about an "imbalance of energy" and note that if you shut one eye and put your finger on the eyelid and push gently you will see a burst of light that is caused by pressing down on the eyeball. Take the pressure off and the appearance of light vanishes.