Zen: The Art and Science of Dropping Thought 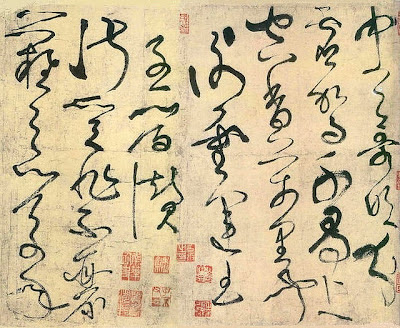 Buddhist yoga (Dhyana, Ch'an, Zen) stops the endless "thinking" and "reflecting" activity of the so called "mind" that produces stress and mental anguish as well as the "soft-fascist" plague of heedless stupidity and dullness now enveloping the whole earth. Zen culminates in direct perception and cognition -- Great Clear (Dark) Mirror Mind. Buddhist religious practice, on the other hand, is devoted to creating more rules, rituals, and "mind-stuff" that will someday have to be dropped.

Human beings are obsessed with "thoughts" and "thinking." Watch for yourself, and note just how many times each day an obsessive Internal Monologue (or Half-Dialogue) kicks in. That, or maybe a splendidly directed Internal Movie showing your actions in the past (usually from an improbable viewpoint) or your plans for the future (complete with thrilling soundtrack)! Wake up from this. It's all horseshit.

With your attention riveted on the imaginary scenarios spinning in your head you are missing THIS.

In Zen it's because the mind is already in the great space of miraculous Enlightenment that there can be liberation, cessation of stress, Nirvana. If the enslavement of the mind were real and not illusory (impermanent, not solid, based on cause-effect) there could be no liberation. All you have to do is revert to the ease and brilliance of the natural state. Warning: this natural state isn't what you "think." It's mystical. But that doesn't mean it is a quietistic, pious vacuity. It's the supremely dangerous vitality of wide-awake Ki.

Adherents of hard core "Buddhist" practices and traditions sometimes take digs at Zen for its teaching of "dropping thought" in order to see one's Original Face, calling it simplistic or nihilistic, maybe not even "truly Buddhist." One hears foolish people say that Buddha never told his students to "drop thinking," but emphasized the Noble Eightfold Path and a step-by-step program of meditation.

No doubt Buddha taught different people different things. Yet sometimes Buddha did tell his students to drop thinking. Exactly that. In the Bahiya Sutta, Buddha says to a man who begs for the direct path to liberation:

Huh! This is Shakyamuni telling Bahiya to drop thinking (don't "reflect" on perceptions and cognition); Bahiya does so and is instantly enlightened. This is the same as the Zen injunction not to put a head on top of your head, or a mouth over your mouth. Not only is Bahiya instantly enlightened, he also achieves decisive liberation from the "effluents" (evil karmic outflows) in a single stroke. What wildly exhilarating Zen! This Bahiya was a real old tiger.

Soon afterward, Bahiya dies. Buddha tells the monks to give his body a proper burial. The monks ask Buddha what is Bahiya's ultimate destination. "What is his future state?" Buddha replies somewhat sharply: "Monks, Bahiya of the Bark-cloth was wise. He practiced the Dhamma in accordance with the Dhamma and did not pester me with issues related to the Dhamma. Bahiya of the Bark-cloth, monks, is totally unbound." Then, inspired by his own words, it seems, Shakyamuni recites a Gatha that sounds eerily like a famous verse in the Avadhuta Gita. Let's put them side by side:

Where water, earth, fire, & wind have no footing:
There the stars do not shine,
the sun is not visible,
the moon does not appear,
darkness is not found.
And when a sage,
a brahman through sagacity,
has known [this] for himself,
then from form & formless,
from bliss & pain,
he is freed. -Bahiya Sutta

In the Hannya Haramita Shingyo (The Heart Sutra of the Great Perfection of Wisdom), Bodhisattva Kannon is sitting in deep samadhi (thoughtless!) when he suddenly realizes THIS, just as Bahiya and Shakyamuni had. Realizing It, he denies that there is any "path." "Gone beyond, beyond, totally beyond," like Bahiya -- who Buddha called "totally unbound."

And if Bahiya was totally unbound, he was a Buddha. That's Zen for you -- Buddhas start popping up everywhere, like mushrooms in the rain forest.

By all means, drop thinking. But do it all at once, like relaxing your shoulders and letting an iron robe fall to the ground. Don't anxiously suppress thoughts as they arise, and don't "sit" in a state of enforced and self-conscious mental vacuity believing that this is Liberation.

Let's all realize THIS once and for all so we can play in the clear sky of Zen!