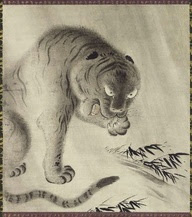 When master I-chung had taken his seat to preach Dharma, a layman stepped from the audience and walked from east to west in front of the rostrum. A monk then demonstrated his Zen by walking from west to east. “The layman understands Zen,” said I-chung, “but the monk does not.” The layman approached I-chung saying, “I thank you for your approval,” but before the words were ended, he was struck with the master’s stick. The monk approached and said, “I implore your instruction,” and was also struck with the stick. I-chung then said, “Who is going to conclude this koan?” No one answered. The question was repeated twice, but there was still no answer from the audience. “Then,” said the master, “I will conclude it.” He threw his stick to the floor and returned to his room.

The mountains, the rivers, the forests & the great oceans, not to mention the chiliocosms in the tip of a tiger's whisker, all emerge from I-chung's stick. Throw it away before you cause any more harm! "And so drunk to bed." In the deep night, snow fell. Master I-chung's snoring shook the monastery.