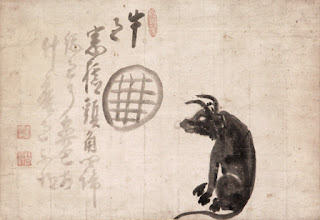 Hell Enlightenment is the haunting, mysterious enlightenment of a hell being who one icy night wakes up just from hearing a bamboo flute played by a komuso Zen priest -- it happened once upon a time, and after that always, for all eternity, and after that never again, deep in the dark remote mountains of Nagano, Japan.

Wordless state, imageless, clear, profound, beyond thoughts, all thoughts shattered -- a thoughtless state, just dwelling without any mind at all in the absolute clarity of all Hell Demons, Pretas, animals, humans, gods, and Buddhas. Gone beyond beyond utterly beyond -- wide awake, clear, night frost melting in your hair, Infinite Sky Mind thrilling and squeaking in the hollow length of bamboo, the moon appearing in a dream, but whose dream? When? Where?