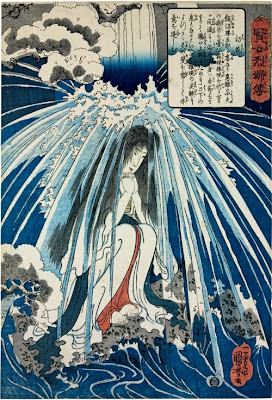 Not using a single word, who's speaking right now? Before any thought appears, what's here? Can you show me the directions north, south, east, and west in vast empty space without pointing your fingers or chin, or even blinking your eyes?

All the senses are just Awareness. (This is a ko-an. Try to "think" it through then, when the way is blocked, merely look at it hard.)

Physical things arise in, and as, Awareness. (They are nothing but.)

But Awareness cannot by Itself, free of physical appearance, be objectified or grasped. (Nothing stands behind sensory appearances; there is no "real" world over and against the apparent.)

So that when one searches for naked Awareness one mysteriously and hair-raisingly finds Nothingness, or Great Empty Space. (But how empty is it, when it's the vibration of Ki -- Spirit -- itself? Mysterious.)

Your consciousness presents Awareness to Itself energetically as sensory reality. (Your limited, small, bodily consciousness is presenting a sensory show to boundless pure Awareness, which "takes it in" magically.)

Is there a reason for this happening? No, there is no “reason." (It is not logical; it can't be formalized.)

Names and Forms give rise to illusory things. Things do not exist before Names and Forms. (These sentences must be read existentially, as a description you can verify for yourself in every day life.)

How could things exist without concepts such as time and space, self and other, long and short, hot and cold, general and particular, thing and No-thing? (Note the interdependence of words, synthesized "forms" abstracted from bodily moving about in space, and general concepts in creating the sense of "existing" things. You can realize this for yourself.)

Because there are illusory things there seems to be Karma, a linear chain of causes and results and conditions. ("Karma" is a delusion of cause/effect generated by desire, clinging-grasping, based upon crazed ignorance of the fact that one is always already THIS.)

By regaining original mind in a flash (Wu, Satori) one dissolves Karma along with the illusory "ten thousand things." Amazing! ("Buddhas of iron, Buddhas of ice:/shivering under mountain waterfalls,/making mudras out of the vast blue sky." Where was this mind ever lost that one had to regain it? Ha ha.)

To anyone who has gone beyond Names and Forms all things appear as no-things -- as the haunting resonance of Great Empty Space. ("The mystical is real. It shows itself." -Ludwig Wittgenstein)

To live more or less constantly in this Non Abiding No-State (Mu Ju Shin) is the goal of Zen. (The Great Perfection of Atiyoga! No obstructions; life is clear, simple, beautiful, alarmingly great.)

The direct way to Great Enlightenment is via letting go of names and forms for intense, sometimes rapturous but always inexplicable physical sensations. (A bold statement that can be verified by dropping "mind" right now. Do some Zen!)

Great Enlightenment cannot be experienced -- it is the experiencing itself. (The "head" thinks it experiences; but it doesn't experience its experiencing. The Observatory sees the Starry Sky, not itself. Mysterious & true!).

This headless Zen way is purely physical (mystical), achieved by dropping Names and Forms and seeing reality as it is. ("Headless" now because the head is nowhere in view; the eye that sees can't see itself; the physical is the same as mystical once names and forms melt away into great space.)

Most of the classic Zen techniques such as koans, sitting, Hua T’ou, and the Ways of tea and swordsmanship and bamboo flute are invented to do exactly this. (What? THIS.)

Doing Zen makes talk and writing seem crazy and superfluous. Yet talk and writing go on just the same -- wonderful! (It's wonderful that we occupy ourselves with little details. Make amusing games and rituals out of it all! Strange harmless walks in the midst of life.)

Sit before a wall and behold all the Buddhas -- on the tip of a single hair, a mountain monastery full of radiant sages! (Like Milarepa and the yak horn. Total nonduality is the interpenetration of all Ki recognized in and as every appearance. A voice chases its echo. A face meets its fleeting image in a steam clouded mirror.)

And don't forget the Yamamba who wanders wherever she feels drawn to and in the darkest night, all alone, dances that wild alluring dance no one ever dances. (The Mountain Yogini doesn't know what she knows, doesn't even know what she doesn't know. Ki goes everywhere like lightning; it has no knowledge, no preferences.)

AUM SWASTI! (Good luck in everything!)

Knock, knock, who's there?
A snail holds the bamboo gate shut.
Wind smashes up the old pines --
and everything's drenched by a freezing rainstorm.

Leave the Starry Sky ablaze --
it won't notice that you went inside.
Groping your way to bed by darkness.
Who says there's any truth to speak of?