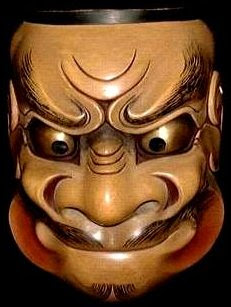 Zen is an earthy, direct and pragmatic way to actualize what is ultimately mysterious. Bypassing words and letters, dropping body and mind both. "Intoxicated by the moonlight!"

Only you can realize this, and you've got to realize it for yourself.

Life is enlightenment. Zen points to the bare living truth of what you have never lacked for a single instant. Why not wake up to it now?

The basis is meditation (dhyana, Ch'an, Zen). Sit down, face a wall, cut off all thinking, and see it directly! There are no shortcuts.

Go into it with sincerity and one-pointed will. Attain real freedom even if you have to sweat blood.

This directness has been lost in a maze of Dharma babble. Many "Zen practitioners" actually believe it is only a matter of memorizing some pungent sayings by the great Masters, or wearing a black robe, or getting hit by a bamboo stick when you start to drowse off in the Zendo!

Naturally, there are also those why deny that any Zen training is ever necessary. For them, this may well be the case. Maybe they woke up as soon as they heard the words "impermanent, no essence, Nirvana." If not, it is wildly foolish to disparage Zen's profound training methods.

Posturing on the Internet, being an expert in Zen or in Buddhism or in any sort of "spiritual" discipline, will not even remotely help you when you are confronted directly with a life or death situation. As you inevitably must and will be. As a matter of fact, here-now is always a life or death situation. The test of something like "Zen" is whether it helps you engage the reality, or fails you. Given that, what remains to be said?

There are Zen practices and forms of training that were effective in equipping people with the equanimity to cut their own bellies open when there was no other way to face reality. Do you have that? Do you even want it?

True equanimity is also compassion and love. Always living right in the storehouse of Awake nature, one finds one's true self by shattering or exhausting a small "self-consciousness" that distorts, perplexes and obstructs It. This happens in a hair-raising instant of satori. After satori, one trains in the art of living everyday life naturally with liberated awareness.

In a garden, the tomato plants grow around sticks. The point is to grow tomatoes, not to collect sticks. The sticks only support the tomato plants so that you can eat fresh tomatoes. All the Zen techniques, including meditation and books of koans and so forth, are like these sticks. Techniques are not the ultimate point of Zen, but it would still be foolish to neglect using them.

This page is devoted to "direct entry using a sharp chopper" -- "seeing into the self-nature and becoming an Awakened One." Lacking such direct entry into true reality as experienced fact, "Buddhism" is just one more pretense-ridden social game involving robes and funny hats, designed to help pathetic, mentally confused "people" feel influential and important.

Realization self-realizes. Enlightenment is not about paper credentials and certifications. Dharma, the living truth of what IS, is omnipresent. It's closer to you than your own eyeballs and nostrils. Why do you need a "path" to it?

Satori is not just a myth or an extra "add on" to Zen or to Buddhism. It's the essence. Do not think you can skip this step and have a calm, self-satisfied and sophisticated intellectual talk about the Buddha Dharma. Your supposedly sharp intellect is of no use to you here.

And if you can't wake up please, for pity's sake stop talking about "Dharma" or "Zen" and pretending that you can help anybody else overcome "suffering." You're only polluting the well and leading other people down your personal karmic path to a ruinous mediocrity.

People have an unfortunate tendency to join religions so they can be treated like invalids But waking up requires boldness, decisiveness and even a kind of tigerish ferocity. Shed your idiotic religious delusions. Shed them all! Go right to the point!