Won Hyo and the Skull 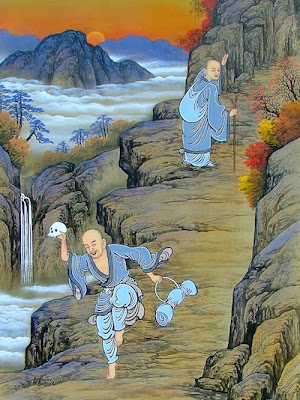 A Korean monk named Won Hyo was on his way with a companion to T'ang China to study Zen there. He spent one night in a cave, where he woke up in the dark suffering from intense thirst. He scrabbled around and soon located what seemed to be a bowl of water. He drank deeply from it -- it was cold and sweet -- and went back to sleep refreshed. When he opened his eyes in the dawn light, he saw that what he had drunk the water from was a human skull. He was seized by the most intense terror and revulsion, to the extent he started to tremble all over and broke out into a cold sweat. Then, all of the sudden, he woke up and knew fully that not a single thing in this world exists by itself, therefore nothing in our experiences is inherently pure or impure, clean or defiled. He sang the following enlightenment song to his companion:


The Triple World arises from Mind.
All so-called things are mere perceptions.
Thus, since everything is basically Mind perceiving Mind,
What is there left to seek?
I will not go to T'ang.