Nan-chuan, Heartless Killer; Or, How "Not a Single Thought Arising" Can Save a Life 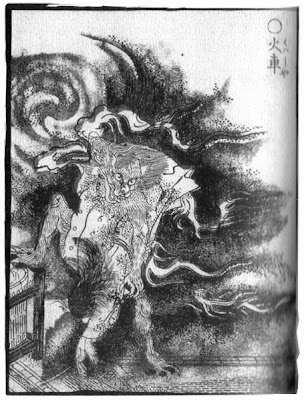 When not a single thought arises in your mind, then you go up the bodhi tree: you supernaturally transform yourself in the three realms and change your bodily form at will. You rejoice in the dharma and delight in samadhi, and the radiance of your body shines forth of itself. At the thought of garments a thousand lengths of brocade are at hand; at the thought of food a hundred delicacies are before you; furthermore, you never suffer unusual illness. "Bodhi has no dwelling place, therefore it is not attainable."  -The Record of Linji

When not a single thought arises, you see everything clearly, and you can even speak to people if you must. Your functioning is direct and unhesitating. That's why Zen was taught to swordsmen (in Japan). Nan-chuan's students, trying to respond to his demand for "a single word of Zen," couldn't say a word because they were thinking too hard, which makes you tongue-tied when a single word might make the difference of life or death. So, Nan-chuan turned himself into a heartless killer. Asked later what he would have done to save the cat, Joshu just put a straw sandal on his head and walked out slowly. He wasn't thinking -- he was just letting It function in a direct, fresh and beautiful way. Nan-chuan said, "If Joshu had been around earlier today, that cat would be drinking a dish of milk right now."