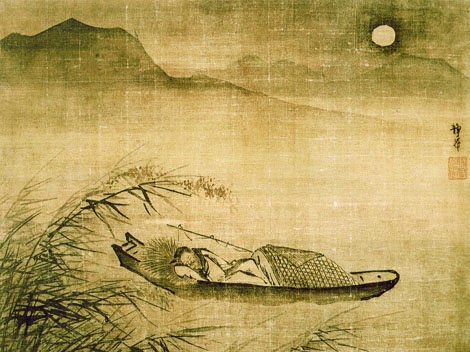 In Chinese and Japanese Zen there is a succinct teaching expressed in phrases such as, "Put down all entangling conditions, let not one thought arise."

Bodhidharma said, "One thought arises, the Triple World appears. One thought drops away, the Triple World subsides." Matsu said, "A single thought is the root of birth and death. Just don't have a single thought and you will be free of birth and death." The Shurangama Sutra teaches that the pure, bright and Profound Mind comes to mistake itself for illusions because of "one thought." Master Takuan Soho said, "One thought (ichi-nen) and the Mind King begins to transmigrate through the Six Realms."

Zen training involves effort and striving to "put a stop to the arising of conceptual thoughts" and make the mind "motionless" (Huang-Po). This is just training. It is not the goal or the ultimate in itself. Takuan Soho advised constant striving (kufu) to "let go of thought after thought and see directly to the place before Heaven and Earth separated." Eventually, there will be a breakthrough and what involved effort becomes relaxed and effortless. Then the stage of training is replaced by wu wei.

Let's say you want to take your rowboat out on the river. But it's tied by a knot you can't untie. You make the proper resolve, use some effort, and saw through the rope with your knife. Then the boat breaks free and you're drifting on the river, no effort. Wonderful! Did having to make an effort at the beginning spoil your experience? Not at all.

Suppose I asked you to balance a tea bowl on your head all day long while walking around, sitting, driving, whatever. At first it would feel like an incredible effort. You would have to think constantly about maintaining your balance. Every time you started to waver you would have to bring yourself back to awareness of the tea bowl. This would go on for days, then weeks. But one day, mysteriously, you would find that you could walk around all day balancing the tea bowl on your head without thinking about it, without even being aware of it.

This is similar to Zen training, except instead of holding a tea bowl on your head you are trying to achieve a state of wu-nien, "no-thought."

You know you've attained this because you can forget about it, and your mind can think or not think depending on circumstances, but there is no holding onto either thoughts or not-thinking. Everything is direct and spontaneous. This is what Hui-Neng in the Platform Sutra calls wu nien. It's the "non abiding mind" mentioned in the Diamond Sutra. It's no thinking even when there is mental activity because the idea of a "thinker" is absent.

In old China and Japan there were always people who'd heard about Zen and understood it in a superficial way by holding onto a particular "idea" such as, "My mind is already Buddha. So I don't need to make any effort. I'm completely free to do as I please, to think or not to think, right now." Then they'd go to a monastery and invite the Master to test them. This is the basic situation of many koans. So the Master would ask them a question and shout, "Answer directly!" -- and because they were so used to processing everything intellectually, they'd be bewildered, unable to so much as open their mouths, and would go away feeling resentful.

One often hears that it is enough to be aloof from one's own thinking, to just "look" at it without attachment or participating in the thoughts. In practice, there is no way to not participate in thinking as a thinker unless you are able first to suspend thinking at will. This is the classic way of Zen, which upholds the necessity of kufu, striving and effort. Cut the knotted rope and drift blissfully free.

Here is an exercise: Try not thinking at all for ten minutes. Set a timer. Are you ready? Go! If you cannot do it, why can't you do it? Thinking is an activity that involves energy. If you cannot stop an activity for even ten minutes, aren't you just its slave? You seem to feel that your thoughts are "yours." Are they yours in the sense that your right hand is yours? After all, if I tell you to clench your right hand into a fist and hold it like that for ten minutes, you can do it, but for some reason if I tell you to stop thinking for ten minutes, you can't! Interesting.

In Zen one "cuts off the way of thinking" long enough to see directly, which results in dropping away the user-illusion of a "thinker." Once the thinker is gone, thoughts are no-thought. An effect of Zen training is that one develops the ability to go without any interior chatter whatsoever (monologue or half-dialogue) for extended periods of time. This absence of chatter -- or "inner silence" -- allows you to develop a direct mode of perception and activity.

Free of thoughts, is there any such thing left over as "mind"?