The Unborn Mind of Bankei & You 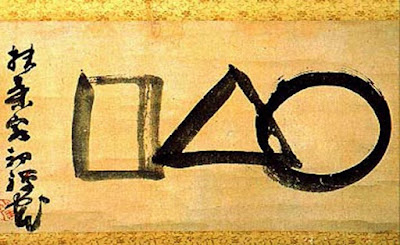 Bankei's first big realization -- which occurred when, dangerously ill from consumption, he spat out a mouthful of blood -- he summed up as "All things are resolved in the Unborn."

His second realization, a deeper & wider one, happened one day after he had just washed his face in the cold water of a stream & straightening up he smelled the scent of peach blossoms on the breeze. This one he did not summarize, but it amounted to, "All appears out of the Unborn" -- in a fresh, shocking, & glistening instantaneous way.

His third realization happened one night while meditating with the monks in a monastery near Nagasaki headed by a Chinese master. This Chinese master had refused to certify Bankei until he went even deeper & wider with his enlightenment. The master's refusal had made Bankei so angry that he stormed out of the interview room. But while meditating in formal Tsao Chan/Zazen that night, he had his biggest realization yet. This one might be summarized as, "All is Unborn." Why not?

He went in at once to see the Chinese master, who wrote him an inka on the spot. But Bankei tore it up, laughing, stamped on the pieces, & left the room.

He worked after that for a few years as a lowly cook in the monastery kitchen before he began walking around teaching people Zen.

The Unborn Mind is the only true Master.
I too have sometimes asked questions like a student.
But in reality I am the only Master I've got.
The same is exactly true of everybody.
So here we are, two Masters, "enjoying a sip of tea together."
Let's look at the white clouds today & laugh!