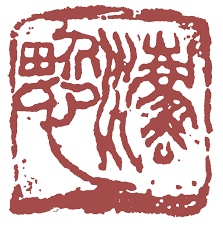 Q: Roshi, you sometimes quote Zen teachers like Huang-Po. Doesn't he just say what everybody knows, & what we've all heard a million times already?

A: Let's consider that. Here's a quote from Huang-Po I just happened upon yesterday:


Phenomena are the Seal of Mind, just as Mind is the Seal of Phenomena. Whatever Mind is, so also are phenomena -- both are equally real and partake equally of the Dharma-Nature, which hangs in the void. He who receives an intuition of this truth has become a Buddha and attained to the Dharma.

There is no suggestion here of evading or condemning or putting an end to phenomena in order to dwell in pure Mind. Interesting, right? Nor is there talk of getting rid of the intangible "Mind" in order to just drift along with phenomenal changes, eating your rice like a simpleton. The two extremes characterizing most modern Zen are here-in entirely dismissed & refuted.

Also, Huang-Po's use of the analogy of a "seal" is quite interesting, is it not? Phenomena "seal" Mind. Mind also "seals" phenomena! The stamp of the utter authenticity that is your preconceptual being on all of your experiences, like a box and a lid that fits it exactly.

For some, maybe just reading this passage will cause a certain intuitive attuning to the Mind Dharma, and if you pursue this intuitive scent by going on to read, for example, Saraha's songs of awakening you might find yourself in some unexpected territory, suddenly immersed in and completely drenched by sahaja.

No. Instead, they'll remember that Huang-Po said you must intuitively experience an awakening in which you realize the Innate, the fundamental nature that has no second, and from then on actually experience every vibration, color, shape, form, sound and sensation as its spontaneous radiance!

Can you put your attention in the space in front of you right now, firmly and quietly, without any thinking or any attempt to construct or to attain or to realize anything specific at all? Do you know that if you can develop this ability and maintain this kind of bare and relaxed attention in any circumstance of life you one day will experience a sudden profound awakening to the Mind Dharma?