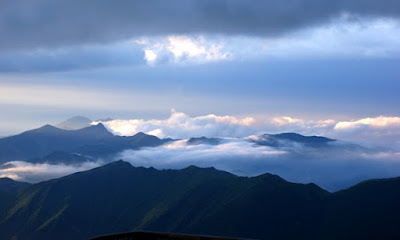 Thus I have heard:

At one time during the dry season, during the hot afternoon, the World-Honored One was sitting peacefully on a straw mat in Jeta Grove near a number of his followers, all practicing relaxed meditation, when he suddenly turned to his  foremost disciple Subhuti and asked:

"Subhuti, where is the sky located?"

"Birds fly through the sky, so I suppose at the height of birds."

"Hah. Are not trees, or at least the crowns of trees, in the sky?"

"Do birds nest in the crowns of trees?"

"So, Subhuti, you have said that birds nest as well as fly in the sky. Right?"

"I suppose so. As usual, O Bhagawan, your logic is overwhelming."

"Well, then, Subhuti, where does the trunk of a tree end and the crown begin?"

"You toy with me, O Bhagawan. You should ask Manjusri."

"Not at all Subhuti. Not at all. I await your answer with the keenest delight."

"Well, Sugata, I would have to say you are asking me to define what is indefinable!"

"Wonderful, Subhuti! I knew you had it in you."

"Sugata, are you saying we're in the sky?"

"You astonish me again, my student. That is exactly what the Buddha is saying. If one cannot define what is indefinable, what is left over to say?"

Subhuti was speechless. The Buddha continued:

"If anything in the world were really graspable, in the endless round of countless rebirths you would definitely by now have grasped it. Do you understand?"

"I think so, World-Honored One."

"Suppose, Subhuti, a person were to decide the Buddha 'got Enlightened' and so became a 'buddhist' in order to get what Buddha got."

"Well, Subhuti, would such a person be called intelligent, or hopelessly deluded?"

"Sugata, such a person would have to be called insane."

"It's like this, O Bhagawan. The Buddha 'got' nothing under the Bodhi tree; he merely dropped all ideas about ever getting or not getting anything. One might say he realized nothing except that, like the sky, realization itself is indefinable."

Subhuti bowed down, pressing his forehead into the dust.