The Kunzang Palyul Choling cult out of Maryland has a specific electronic M.O. they use against critics and perceived enemies -- namely to try to invade the mental space of their target with disturbingly juxtaposed words and images, and then to build paranoia in an off-the-cuff manner by mentioning anonymous "investigators" and hinting at the cult's immense power, money and legal resources.

Sometimes, it's true, they step over the line into stark absurdity. Marvel, for instance, at this brazen appropriation by Alyce Zeoli and David Williams of the official seal of the U.S. Marshal's service to decorate their crude, poorly written anonymous slander blog: 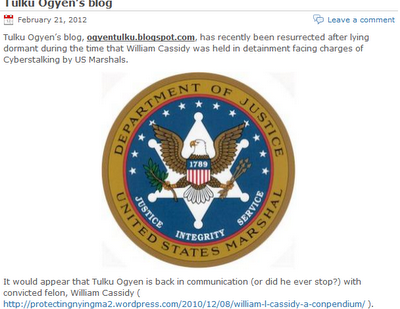 (Side note to Zeoli and Williams: the U.S. Marshals didn't go after William Cassidy -- it was the FBI and the Department of Justice. So why not cut and paste the FBI's official seal onto your anonymous hate page? Try it out. Go on; I double dog dare you!)

However, it's also true that they often use crudity, poor language skills and sheer ridiculousness to their own cultish advantage, by giving targets the idea that here are some absolutely insane, sub-literate, relentless trailer park type religious zealots who have no sense even of how unfathomably stupid they appear. Most people do not want to tangle with such backwoods fools, and will quietly step out of the way and let Alyce Zeoli do exactly as she wants. I myself tried to step aside a number of times and was only kept unwillingly in the picture by Alyce Zeoli's constant public insistence that I was actually her enemy "William Cassidy." Confronted by over 100 evil attacks per day, at a certain point in 2010 I was faced with the stark choice of either deleting my account and leaving Twitter (as well as the blogosphere) once and for all, never to return, or sticking it out. I knew, of course, that they would do their best to punish me for my defiance -- the defiance of simply continuing to exist in the face of the Zeoli-jihad.

Then as now, my mere existence as a person who dared and dares to make light of "Tulkus" is the biggest scandal from the point of view of Alyce Zeoli and her Zeolibots. So what if I never had anything to do with William Cassidy? Due to my liberal use of the #Tulku hashtag on Twitter, there are at least twenty other Twitter users making regular absurdist word-jokes about Tulkus. Why not join us? It doesn't seem to upset action star tulku Steven Seagal.

As Alyce Zeoli doesn't meditate or have a job or actually teach any Dharma, she's enjoyed plenty of free time over the years to work on refining Voodoo-style Psyop warfare techniques. Seems ridiculous, yet some people are very, very frightened by this cheap stuff. Although a wash-out as a Buddhist teacher, I'll give her these props: she's a genius at cyberstalking -- the consummate Web psychopath. Take a look at these tweets from 2010. "Someone" created an anonymous Twitter account using the maiden name of William Cassidy's deceased mother to harangue him from "the beyond": 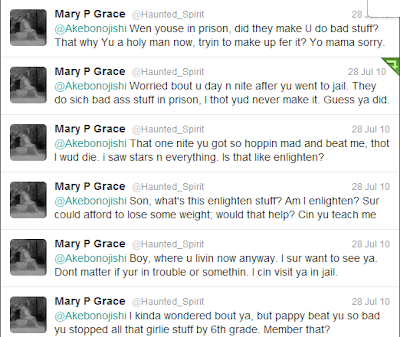 Am I wrong, or is that some kind of tasteless and evil shit right there? (Note that these tweets are all Replies to @Akebonojishi -- my Twitter handle at the time. Alyce Zeoli had recently announced to her cult followers with absolute certainty that @Akebonojishi's Twitter page was being run by the "demonic" Tenpa Rinpoche. I soon changed my Twitter handle because I was getting creeped out by all this unwanted interference from crazy people. And I had to keep on changing it, sometimes as often as twice a week, because they soon worked out how to find me -- by looking at the "followers" and "following" lists of my Twitter friends.)

My personal feeling, and it is a strong one based on having been harassed by many similar anonymous accounts, is that these tweets were written by Alyce Zeoli herself. Once a psychic showlady, always a psychic showlady. The spirit-channeling habit dies hard. "Put a crown on it -- it's still a horse's ass."

When I asked the FBI agent in charge of the faux-"investigation" into William Cassidy's supposed cyberstalking of Alyce Zeoli if she'd ever taken a look at the @haunted_spirit Twitter account, she gave me an evasive non-answer and changed the subject. Yet it would be simple to subpoena Twitter for the e-mail address and IP information used in setting up these stalker pages.

(Note: Perhaps some of my readers are with law-enforcement. Suppose some enterprising FBI agent decided to pursue this lead only to discover, hello, that @haunted_spirit and a number of other anonymous Twitter stalker accounts can be traced directly back to the Kunzang Palyul Choling's Maryland compound? Suppose law enforcement then raided said compound -- well armed and in tactical gear, of course, and under cover of darkness, because there are rumors that the KPC stockpiles weapons -- in order to search "Jetsunma's" personal computers? Suppose they then discovered that the IP addresses matched up? Would this not be an open-and-shut case of fraud, deception, racketeering, stalking, and lying to federal agents? Note that this is just a hypothetical thought experiment. I wish actual pre-dawn FBI raids on nobody.)

Sometimes I almost wish US vs. Cassidy had gone to trial, because I would love to have provided Cassidy's extremely able defense team with the literally hundreds of similar cult stalker Web pages I downloaded from Twitter and Google caches. This effort cost me about two weeks of hard work and it is an impressive archive documenting the rank cowardice, foolishness and villainy of Alyce Zeoli and all her Zeolots. I like to imagine a jury wading through this tower of print-outs from KPC attack blogs and Twitter accounts, as they evaluate the extent of the "emotional distress" suffered by a sadistic Tulku.

For those disturbed by all this Dark Tantra Voodoo cult psycho stuff, and I agree that it is disturbing, please keep in mind that there is absolutely nothing "Jetsunma Ahkon Lhamo" and her cultists can do to you -- buffaloing an FBI agent to raid someone's home is a tactic they can only use once in this whole century, and they've already used it! And look, I'm no worse for the wear. The Zen of direct realization is supreme. They're nothing but cowards, flinching at their own shadows. If you believe Buddhist teachings, their evil karma is going to sink them all into a dark Hell Realm, but who knows whether that will happen before or after their criminal antics land them in saffron-colored jumpsuits? As Nietzsche said, it's little conundrums like this that make life so undeniably colorful and worth living.

For more about the criminal activity of an infamous Tulku and the ill-conceived, deranged and mistaken FBI raid on my home, please see: "The Deadly Viper Assassination Buddhists" "Open Message to Karma Kuchen Rinpoche", "Crimes & Tulkus" and "A Short Interview with Andrew Wilson (February 15, 2011)"