An Open Message to Gyatrul Rinpoche 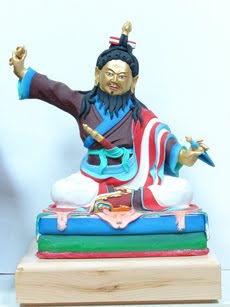 I am writing to you because I am presently being persecuted and stalked both on and off the Internet by a sketchy group of characters calling themselves the Kunzang Palyul Choling, led by a former student of yours named Alyce Zeoli, aka "Jetsunma Ahkon Lhamo."

Why do I bother you with this matter? After all, you can't be blamed for what a former student says or does, can you?

Simply because the Kunzang Palyul Choling Website often quotes you in support of their idea that Alyce Zeoli is a "Living Buddha" who can do no wrong, and it regularly publishes links to videos that show you speaking with approval of Zeoli.

But Alyce Zeoli's actions reveal that she is an extremely disturbed and malicious person.

Starting in the autumn of 2009, and many times after that, Zeoli publicly claimed that I was actually a man named William Cassidy, aka "Tenpa Rinpoche."

Because of this, her followers began to stalk me with unending threats and mockery on Twitter. They interfered dozens of times each day with my ability to communicate. And I had to delete or change the name of my Twitter account over twenty times in what turned out to be a futile attempt to evade them.

I also observed Zeoli and her sangha mocking, insulting, and threatening many other people. Their main object of hate was "Tenpa Rinpoche," but they also regularly attacked a former Kunzang Palyul Choling nun, a blogger who lives in Chicago, a Nonduality teacher in Miami, and a taxi driver in Austin, Texas.

In a memorable series of 2010 Twitter messages, Zeoli asked her online followers to visualize a Tibetan ritual dagger stabbing William Cassidy's heart, just as -- according to the book The Buddha from Brooklyn -- she once she threw a "divorce party" in which she encouraged her alcohol-intoxicated monks and nuns to stab, and then urinate on, an effigy of her ex-husband.

These interactions were all on Twitter and in full public view.

In 2010 "Jetsunma" was somehow able to convince an FBI agent that she was being cyberstalked by William Cassidy when so far as I can tell it was just the other way around. She also gave the FBI agent a number of my postings on Twitter, claiming that they were actually by Cassidy. As a result, my home got invaded in a predawn raid by FBI agents, who handcuffed my girlfriend and I at gunpoint and confiscated our computers using a search warrant.

On that very same day (February 15, 2011), William Cassidy was arrested in California and flown to Maryland. He spent 10 months in a federal prison until a federal judge released him and threw the case against him out of court. According to the judge, all of William Cassidy's remarks about Zeoli on Twitter were "protected speech" and so could not be used to imprison him.

Yet even now, Zeoli and her monks and nuns continue to attack William Cassidy -- and me, too -- on their anonymous hate blog "Protecting Nyingma." They also mock and deride Judge Roger W. Titus for his decision, claiming that the Judge must be "anti-woman."

I've heard rumors that Zeoli promises her followers to intervene personally in Bardo in order to save them from any karmic consequences of the evil actions she orders them to do on her behalf.

I've also heard that Zeoli asks her followers to worship her as an "Emanation of Primordial Wisdom" and has given them this mantra: "Om Jetsunma Ahkon Lhamo Ah Hung."

It seems to me that Zeoli encourages her monks and nuns to break their Buddhist vows in order to satisfy a personal taste for vengeance and, perhaps, for the sheer enjoyment of hurting people.

One of the main KPC monks who cyberstalked me so ruthlessly -- John Buhmeyer, or "Palzang" -- is now serving a mandatory 20 year prison sentence in Arizona for raping a young boy at the KPC compound in Sedona. At the time this incident happened, he was stalking me on Twitter at the rate of up to one hundred posts per day, and "Jetsunma" enthusiastically praised him for this show of devotion to her.

Interestingly enough, starting in 2007 William Cassidy had posted a number of warnings on his Web site that "Palzang" was a dangerous sexual predator who had been jailed for preying on children in the past and would undoubtedly do it again. Yet Zeoli denied it all.

According to a posting on their official blog, Zeoli has now simply washed her hands of "Palzang" -- she accepts no responsibility.

Meantime, the stalking continues. Just a few days ago Zeoli and her head monk David Williams published an anonymous blog article on "Protecting Nyingma" mentioning the name of my girlfriend, which they learned via a "Google" search, and speculating in offensive terms about the nature of our relationship. They also suggested that I ought to "feel the sharp edge of a knife." And in other recent posts, they have accused me of flying low over their Poolesville, Maryland compound in a helicopter with the aim of causing them "emotional stress."

I am a freelance writer. Alyce Zeoli has mocked me on Twitter many times for "not having a job." How likely is it that with a freelance writer's income I'd ever find the money it would take to buy or rent a helicopter to fly over the KPC compound in Poolesville, Maryland so that I could cause "emotional stress" to these idiots?

What do you think, Rinpoche? Does the thousand year old Nyingma tradition need any "protection" by Zeoli and her vicious gang of clowns?

As the KPC intensifies its cyberstalking campaign against me, over a dozen of my online friends have now confided that they fear for my life. I beg you to take some action right now to calm and restrain Zeoli and her disturbed followers before it is too late.