The Energetic Nature of Zen 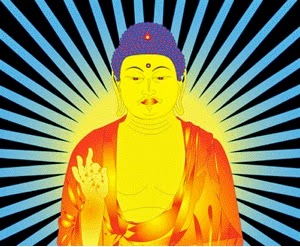 Despite what some people believe, Master Bodhidharma didn't experience satori after wall-gazing at the Shaolin temple. According to all the classical Zen accounts, he was suddenly awakened while still in India and received the Mind-to-Mind transmission from his teacher, Prajñatara, who is said to have been a woman.

If you read through various Chinese Zen texts, you'll see that often people (Bodhidharma but also Hui-Neng, for example) "wake up" without doing any meditation, but they practice meditation for many years after. Reason for this? After the initial awakening (satori), one still needs to cultivate the pure, imageless Mind by letting go of all the thoughts and mental images that arise. In Zen, it's these continuing thoughts and mental images that embody all the "karma" from one's past existences, and will perpetuate the karmic round of cause-effect if not completely shed. Even though Bodhidharma had woken up and been given the Mind Transmission by his teacher, he still wasn't completely liberated.

The story about Bodhidharma tearing off his eyelids (or his legs withering as he sat in meditation) is just an expression of his formidable willpower. He blazed with energy (Ki). Zen requires nothing less.

Bodhidharma brought the direct Mind Transmission to China energetically, by leaving India and making the hard journey. He then demonstrated the blazing truth of Zen by sitting in front of a wall at the Shaolin temple for nine years. As Huangbo says, "Therefore Bodhidharma sat rapt before a wall, and did not lead people into having opinions." Opinions are what cause arguments.

Zen has nothing to do with forming opinions or having arguments but, as Bodhidharma said bluntly in his remarks to the Shaolin students, is a matter of instantly seeing the pure, imageless Mind-Essence and then cultivating that awakening for the rest of your life through careful and often arduous practice. There is no other way to attain liberation, and if you do not attain liberation you will continue to be swept along, bobbing and sinking, in samsara.

According to Bodhidharma, a few rare exceptions aside, if you want to fully awaken to the Mind Dharma you must go out and find a teacher who can help you develop your Zen ability.

Seeing the self-nature is seeing Mind. Every sentient being already has the pure, imageless Mind, but most don't realize it because they cling to thoughts and opinions and believe in the independent existence of external objects and beings.

Once you experience your initial shock of awakening to the imageless Mind you must cultivate it with hard, exhilarating practice. Look at the Ten Ox-herding pictures, which illustrate this point in detail.


Zen is not a matter of reading books and talking about Zen. At the most, reading a book or hearing a talk about Zen can give you some initial insight, but if you do not follow it up with energetic practice and cultivation your insight will vanish into thin air.