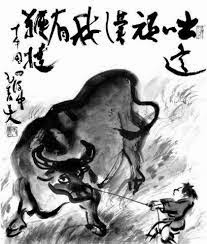 Sometime in the eleventh century, starting with Master Kakuan (Shiyuan), Zen teachers began circulating a series of pictures and writing verses on them to elucidate the actual meaning of cultivating Zen's Dharma of the Original Mind-Essence.

These pictures are delightfully simple. They all deal with a boy who has lost his ox. He tracks the ox down, having to wander in remote, wild, frightening and solitary places; he catches the ox, wrestles with its energy, holds it with great effort, trains it with a whip, rides it home playing his bamboo flute. Then, once the ox is trained, the boy can hang up the whip and relax peacefully, sitting in the moonlight, sleeping under the noonday sun. Eventually, both ox and self are completely forgotten. Thus, the eighth picture is just an empty circle, boundless. The next picture is called "Returning to the Source." There are no human beings in this picture, just a flowering tree beside a fresh stream.

The tenth picture shows the boy grown up into a man. He doesn't have his ox anymore -- or maybe the ox is now his fullsome belly. He's "Entering the Marketplace with Arms Hanging," totally relaxed and at ease, laughing like a Taoist sage. It's in the tenth picture that we see the result of all the efforts and struggle: "It's just like This." Even enlightenment is forgotten. There are no barriers. The dusty marketplace is the same as the Great Source.

To assume that you can leap to the tenth picture without catching, restraining and taming the ox first is a ludicrous presumption sometimes called "buji Zen,"which has been defined as:


Bravado or excessive self-confidence in the practice of Zen. A tendency attributed to some practitioners to convince themselves that since all beings possess the Buddha-nature they are already enlightened and hence have no need to exert themselves further.