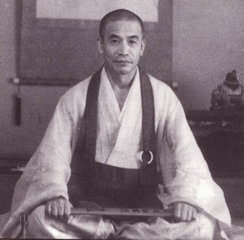 Q: I've been visiting some Zen forums on the Web, and I keep hearing that Zen rejects sitting meditation, along with the sutras. Is that so?

A: Absolutely not! Sitting meditation is discussed in the earliest Zen texts. What's more, the "form" of the sitting in Chan is always the old Buddhist style of lotus or half-lotus. This Buddhist sitting meditation form shows firm determination, thereby embodying Shakyamuni Buddha's resolve to gain enlightenment and liberation no matter what, just as described in the sutras. This is what Bodhidharma did in the cave at Shaolin and why he was considered so unique and strange by the Chinese monks, who were being schooled in reading sutras and bowing before altars but not in the "wall-gazing" dhyana.

The Chinese already had Taoist sitting meditation but it was much more relaxed. It's called "sitting in forgetting" or even "sitting in oblivion." You could do it in a chair, for example, or even lying down in a dark room. Huangbo Xiyun praised Bodhidharma's sitting meditation, saying that it was a way of teaching people how to "cut off thinking" and "forget all views."

When Zen reached Japan it was also identified with sitting meditation. You have to understand what the Japanese were facing in their everyday lives at this time. It can best be described by the words "hell-universe." The sudden eruption of a "hell-universe" is the basic setting of Japanese Zen -- a keen awareness that, although right now you are drinking sake and viewing the cherry blossoms or trimming your bonsai, tomorrow you may well be facing a wall of flaming arrows or getting shaken to death in an earthquake or drowned in a tsunami. So what will you do to transcend any anxiety about the inevitability of suffering and death? Many Japanese took up Zen to do just that, because Zen was understood as embodying the "immovable mind" and also as transmitting the brilliance of Shakyamuni's enlightenment upon seeing the morning star. (For the Japanese, as probably for some Chinese, Zen is a "yes" to life and not a "No.")

The Japanese "sitting meditation" Zen can be done in lotus, half-lotus, or in Seiza. Seiza Zen, or Mokuso, is better for short periods of meditation. It is used in all the martial arts.

There is a mysterious power to taking a resolute sitting position and abandoning all sounds, forms, thoughts &c. The energetic state that rises directly out of such resolute stillness is nothing less than amazing.