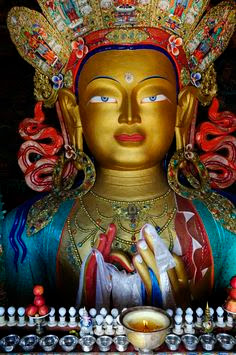 Once during the political unrest of the reign of Wutsung, known as a ferocious persecutor of Buddhism, the future Emperor of China, Suan-tsung, hid out in secluded Zen monastery.

Master Huang-Po happened to be visiting the Master Hsien-kuan at this particular monastery. As he did his usual series of prostrations to the statue of Buddha in the Buddha Hall, the future Emperor interrupted him with a stern lecture: “In our pursuit of Tao, we must not be attached to the Buddha, nor to the Dharma, nor to the Sangha. What does Your Reverence seek after in performing these rites?”

Huang-Po replied, “I am attached neither to the Buddha, nor to the Dharma nor to Sangha. I am merely performing the rites as mandated.”

The future Emperor asked, “What is the use of rites?”

Huang-Po gave him a sharp slap.

“Whoa. You are being too rough,” said the future Emperor.

Huang-Po laughed and asked, “What kind of thing do you find here in this place that you should speak of ‘rough’ and ‘refined’?” And he gave him another slap.

The future Emperor probably knew something of the teachings of the Oxhead School, which were also basically Huang-Po's teachings, that Mind itself is Buddha so there is no need to bow to external Buddhas.

However, if you know that your Mind itself is Buddha, why not bow to external Buddhas? It's called performing the rites as mandated.

That's the lesson in nonduality Huang Po gave to the future Emperor of China in two ringing slaps.