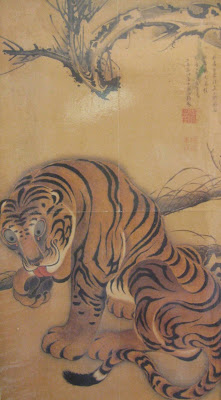 Student: I've heard that the correct Way of Zen involves no effort. One simply realizes one's true nature exactly where one is. The truth was right under one's nose the whole time. Comment?

Roshi: It sounds to me as if you've read some good books on Zen, but have NOT all by yourself truly & fully experienced the fundamental realization of Zen (the second phase of "mountains are not mountains, rivers are not rivers," or Satori). This is like someone deciding not to go on a journey to some beautiful far off place because of reasoning that, after all, he'll have to just come home in the end. Yes, you will return in the end, but you will return CHANGED.

It may be right under your nose, but you cannot see or smell it until you've leaped over all your former thinking in a single instant -- which, as Huang-Po says, takes amazing "strength."

If you do not have this strength to do it all at once, Huang-Po says, you should put out great effort to "practice the non-stirring of thoughts" in all circumstances of your everyday life, and in five or six years you'll likely have made enough progress to accomplish the rest spontaneously.

Huang-Po himself clearly said that the Way is attained by "stilling the movements of the mind" [in full alertness!].

Student: I only know what I've heard."Doing nothing" makes sense to me. I'm not here to get into a pissing match.

Roshi: The Wanling record, with all its questions and answers, is nothing but a prolonged "pissing match" between Huang-Po and his questioners, if you want to read it that way. As I read it, Huang-Po was compassionately pointing out the "sudden entry" Dharma Gate to Liberation.

If you were really capable of "doing nothing" you would already be a Buddha. Only a Buddha possesses the rare power of doing nothing in complete alertness.

Roshi: Do you think it doesn't take any effort to cut off thinking & keep your mind immobile & unresponsive in all the situations of everyday life so that you can enter the Way? Think again!

Student: And Huang-Po also says nothing is ever attained, that the Way cannot be approached or withdrawn from or accorded with.

Roshi: Aha. Where exactly, cough cough, does Huang-Po say this? Let's go to the little book. Ah! Here  is Huang-Po addressing his students:


If you students of the Way do not awaken to this Mind substance, you will overlay Mind with conceptual thought [plunging back into samsaric states].

If only you would learn how to achieve a state of non-intellection, immediately the chain of causation would snap. . . . Only renounce the error of intellectual or conceptual thought-processes and your nature will exhibit its pristine purity -- for this alone is the way to attain Enlightenment, to observe the Dharma, to become a Buddha and all the rest.

Prajna is Wisdom; wisdom is the formless original Mind-Source. Ordinary people do not seek the Way, but merely indulge their six senses which lead them back into the six realm of existence.

You must get away from the doctrines of existence and non-existence . . . This is not something which you can accomplish without effort, [!!] but when you reach the point of clinging to nothing whatever, you will be acting as the Buddhas act.

My Way is through Mind-awakening.

Mind is the Buddha, while the cessation of conceptual thought is the Way.

Ah, be diligent! Be diligent! Of a thousand or ten thousand attempting to enter by this Gate, only three or perhaps five pass through. If you are heedless of my warnings, calamity is sure to follow. Therefore it is written: Exert your strength in THIS life to attain!/Or else incur long eons of further [karmic] gain!

As the Tibetans say, the "exhaustion of the intellect and phenomena (blo zad bon zad) results in the total realization of the Primordial Purity (ka dag) of the natural state." Unlike most Ch'an teachers, up to & including Sixth Patriarch Hui-Neng, Master Huang-Po actually minimizes Chien-hsing (kensho), and points even beyond Wu (Satori). Here, he gives his students direct instruction on how to make the false mind self-extinguish, which is synonymous with Liberation and Nirvana!

How will you attain this? Do I have to let out a ringing shout or slap your face for you to see it instantly? SVAHA!