Sharpen Your Knife on a Dragonfly's Wings 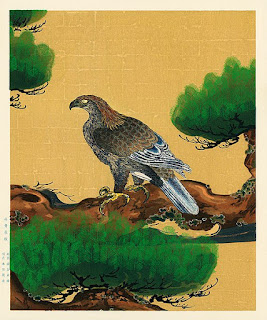 The Ch'an Masters of what came to be known as the Hongzhou School of the T'ang Dynasty in China are not especially "encouraging" when it comes to the ease of Enlightenment and the time that it may take. (I am much more so.) How does the Golden Eagle chick crack its hard world-shell, so it can sing in the blue sky amid white clouds?

Huang-Po, asked how to follow the Way of Ch'an, quoted the Lotus Sutra: "Just spend twenty or thirty years cleaning the dung out of your mind that has been accumulating there since birth."

By "dung," as becomes explicit in the same passage, he meant various views, ideas, thoughts, opinions and concepts. But is Enlightenment guaranteed even then? No! "Of the three or five thousand students in our sect, only three or four individuals will ever attain the goal."Ouch!

According to tradition, Huang-Po had thousands of students over his lifetime. If we believe him, probably less than a dozen of these ever attained what he calls "the mysterious tacit understanding" of "the Highest Truth" transmitted to China by Bodhidharma. What's the point of it all?

Are Lin-Chi, Joshu, and Yunmen more encouraging? Not really. Lin-Chi, in one famous passage, speaks of his many years of practice before attaining realization, and yet he cannot refrain from calling his clueless students "shitheads" and the like for not getting it instantly. But maybe Lin-Chi was just a big clown.

Yunmen tells his students that if they find an old monk who actually has some Ch'an ability, they must hang up their straw hats and study hard with that person for twenty or thirty years. Then, at least, even if they don't get "it" in this lifetime they'll be fairly certain of getting another human body so that they can try again in the next life. He describes those students who waste their time arguing over words "green flies buzzing around a lump of shit."

Our Master Joshu is slightly more encouraging. Like Huang-Po and the others, he says, "When the mind does not arise, everything is flawless." Very good! (Note that he doesn't say, "Whether the mind arises or not, everything is flawless," which would be an intellectual view and a basic misunderstanding.) "Next year spring is still spring."

So how does one reach this experiential realm of immediacy in which the mind does not arise, and everything is flawless? "Just sit for twenty or thirty years and follow what is true." These old men seem to have made a colorful fetish of just sitting down.

Uh oh! There's that twenty or thirty years of Zen practice again! But wait: "If at the end of this time you do not get realization, you may cut off my head & take it away with you."

That's it. That's the best case scenario of all the Hongzhou school Ch'an teachings: you are certain to attain the mysterious realization after a mere twenty or thirty years of "just sitting" and "following what is true." Or you may take away your Master's head on a bamboo pole. In the rain or the snow, monsoon or blizzard; your pick.

Were they serious about all this? Or was it just inflated Zen rhetoric? Lips flapping in the mountain wind?

There is no stepping back from the "mysterious realization," as it is not a thing existing in space. What is it, then? It's your own treasure. Why hire someone else to find it for you, when it's closer to you than your eyeballs & nostrils? When you find your roaming horse, you also recover all of its hairs, too -- all at once!

Still, over many centuries of Ch'an history, thousands of people left home, humped it up & down mountains, & ate only rice gruel & vegetables with the aim of receiving the Mind Transmission and the tacit understanding that can only be experienced, not explained. If all this were just something trivial like getting some phenomenal object of desire -- a beautiful wife or a nice house or a book deal -- would Yunmen have told students to sacrifice twenty or thirty years of their lives doing nothing else but trying to find an entrance? (Rhetorical question! Sssh.)

The Ch'an ancients wanted their students to take what they taught seriously. They were anxious not to cheapen it by promising an easy entrance for everybody & their little sister. (Your little sister is probably Enlightened already, so don't worry about her! She's squatting on the beach patting mud into a sand castle right now.)

To enter Zen with the suddeness of a knife thrust, you must first sharpen your knife. A dull knife doesn't cut. Toss some water on the whetting stone! Put your elbow & wrist into it.

Try sharpening your knife on a dragonfly's wings! The summer breeze strokes your forehead -- red flowers bloom like suns in the depths of the thicket.