Zen is the Dharma of Mind-Only 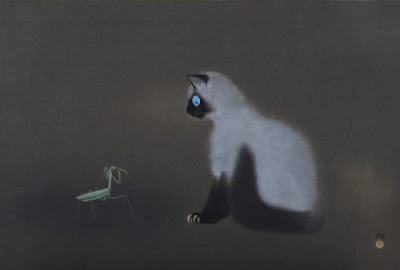 Zen is the Dharma of Mind-Only. Wake up to it now and you won't have these thinking-problems. Mind is always appearing right in front of your eyes, in your nostrils and ears and on your tongue.

Who is mind? Who are you? Aren't you the Eternal Buddha? (Eternal not because you endure for all time, but because in essence you are purely & radiantly timeless -- never once enslaved by a past, present, or future. Svaha!)

Leaving aside various verbal and written teachings, which have always been mistrusted even in "Buddhism," the Buddha Dharma is no more than the experiential realization of Mind-Only. This means there is not even the difference of a hair between Zen and It.

Where does this institution called "Buddhism" exist outside of your own mind? Outside of your mind there are no dharmas to fill your eyes with green mountains, buddhas or non-buddhas.

As the Lion of the Shakya Clan once said, "There is a realm of the unborn, the unconditioned, the unmade. If there were not such a realm, there would be no refuge from the born, the conditioned, the made."

The born, the conditioned, the made is the realm of thinking, of attaching to names and forms, trying to nail clouds to the sky or a paper tail on an extremely skittish donkey. Leap over all this, smash it to dust.

Abandon thinking and attaching to names and forms, and you are instantly --wow! -- in the realm of the unborn, the unconditioned, the unmade. (Put strength in every hair, abandon conceit, & maybe you can stay there -- cooling your heels in Jeta Grove, enjoying the fresh breeze on your forehead.)

If I'm not mistaken, Huang-Po said this over and over. For example: "The Patriarchal Gate is calming mental functions and forgetting views." A perfect description of what is taught in the Pali suttas, too.

Shakyamuni's transmission is also the Mind-Seal of Zen as brought to China by that wily old rascal Bodhidharma. So -- I have a humble poem for you:

The treasure of a mountain hut, a thousand silver trees.
The jewel of a rustic fisherman, a single straw coat.