A Note on the Tao: Older Than Gods, Even Older Than the Blazing Inner Light 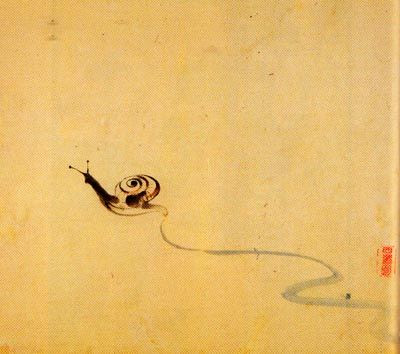 This whole universe is the majestic outpouring display of a single awareness ("the one mind, one consciousness" of fable -- but THIS fable is wildly true).

It's in the shrike, it's in the ant, it's in the inchworm -- it's in YOU. "Outside of this Mind there are no dharmas to fill your eyes with green mountains." (Master Huang-Po)

It never experiences anything but ITSELF -- but to experience itself it has to limit itself, starting with a single decisive stroke that divides this from that, here from there. Just as an endless echoing children's game can begin with a straight line drawn in the damp sand of a courtyard. Just as a single falling yellow leaf can signify a whole autumn forest. Do you smell the smoke in the rainy air? That's the woodsman's fire. And the woodsman's wife is humming a tune as she sews a patch into his threadbare jacket. Are we speaking French & Spanish yet? There's also a grassy cork forest in the depths of Portugal. And a barnacle studded whale rolling out of the chilled salt water just north of Portland, Oregon.

Of course It can also revert to experiencing itself solely as a bare, self-knowing, imageless blaze of Light. Yet even this blaze of Light tends to mute itself down a little & then turn into a variegated universe of subtle rays, colors, sounds -- & it is only a few steps from this playful leap to the objectified four great elements, the sensory organs & their objects, & the seeming material universe of human conceptions, featuring countless people walking around believing they are some sort of unique & irreplaceable selves. The horns of a rabbit! The lucky paw of a snail!

Yet a single unsophisticated glance into the Starry Sky refutes all this madness in half an instant.

Even the Light -- whether the Light of the Starry Sky or the Light inside your head, between your eyebrows & an inch or so inside -- is not the ultimate. No.

The ultimate is the Tao, which is older than gods, older than even the blaze of immaterial Light that gives birth to (or is simply misrecognized as) phenomenal stuff. To call it Nothing is to miss it completely. To call it Everything can only provoke a burst of astonished & derisive laughter. ("Tao is in grass, in broken tiles, in ants, in dung." So said Chuang-Tzu. In electrons, too, maybe? If you can ever put one on your eyelashes.)

Here one must hold one's tongue. For nothing that can be said about the Tao can capture the Tao. It is like trying to catch a big, clever catfish in a small gourd. Try all day & night for the rest of your natural life -- it will never happen.