Awareness Is the Horse's Nostrils 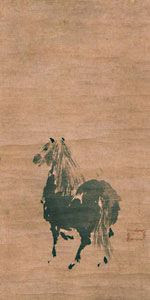 Q: Roshi, what do you mean by "awareness"?

A: Awareness is. In fact that's a redundant statement. But you see where I'm pointing.

It isn't that there is awareness. It's that awareness & only awareness is. What & where isn't it?

So really there is nothing going here but Awareness appearing to Awareness, like water poured into water, space into space, a mirror reflecting another mirror. Miraculous!

It (Awareness) is just the mysterious & profound appearing of all this (sensory experience) to itself. The pines are deep green, the flowers bright red. That's how it all really is for us. Wake up to fantastic truth of it! Shake the snow out of your hair.

This observation goes for anything & everything you can name that ever gets experienced by anybody anywhere at all at any time whatsoever.

I am not someone who is aware of things. Awareness just appears to itself, sometimes defined by a physical POV.

Note: Physical here doesn't mean "material" -- except that in the sheer deluge of appearance one recognizes materials. (And also immaterials.)

One might speak of an exquisitely fine filigree of the Awareness appearing to Awareness within the Void of Itself.

Sensory experience, when wrongly conceptualized in a state of ignorance, leads to the laughable idea of a subject here & objects there. In reality, it is just Awareness here, there, everywhere.

So can I be aware that what I've said is a fact, without self-contradiction? Yes! I can realize the truth of it, at a mysteriously different level.

That mysterious realization is sudden & inarguable. Awareness comes to realize what it is now & always was & always will be. It regains its majesty, its subtle reach, its freshness, its vigor, its vibrant quickness.

Hear the rattling hailstones from out of the half-clouded half-blue sky. See the raven tearing twigs from the dogwood to build a nest in the Douglas fir.

For a long time a word was on the tip of your tongue. Now it springs forth like the mythical golden haired lion, like red flowers in the mouth of the Void.

So, you ask, "What is it that realizes the reality of Awareness?" I answer, "It's the Awareness itself!" Nothing has ever existed outside it. Not a donkey's jowls, or a horse's nostrils, or a raven's iridescent black tail feathers.

(The Dzogchen tantras say as much: rang shes rig gi rgyal po, the king who is self-knowing awareness, always present, yet always beyond all conceptualizing capture in terms of subjects & objects.)

It's just like Ukigomo: the white clouds enjoying a fresh spring breeze.

It is not true that "I" am aware of anything at all. For awareness is the only "I" there ever is. Awareness is aware even before there are words for it.

Gold is gold. Make it into the delicate filigree of a necklace laid out on red velvet in the window of a Paris jeweler's shop, it's still gold.

Nothing is ever present anywhere or at any time but awareness Itself, and the idea of "persons" facing "things" is a mere conceptual ploy. (A ploy that is only possible, what's more, by & within the wonderfully pure expanse of Awareness.)

The Self-Arising Primordial Awareness Tantra tells us that this manifest awareness is present in everybody, but nobody realizes it.

This is interesting. Nobody realizes it -- not even a Buddha. It is in fact "the majestic ruler of all buddhas."

Nobody realizes that the self-arising primordial awareness is present, because it is only by means of its presence that you can ever know or experience anything at all, including your so-called realization of It!
"How are my nostrils different than a horse's nostrils?"